Paper Girls
2022
Amazon Prime
1 Season
8 Episodes
Paper Girls follows four young girls who, while out delivering papers on the morning after Halloween in 1988, become unwittingly caught in a conflict between warring factions of time-travelers, sending them on an adventure through time that will save the world
10
(1 votes)

Tick...tick...tick... Time for the Paper Girls to come out and play. Join them on July 29th on @primevideo. pic.twitter.com/i190yg9Fra 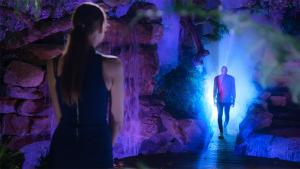